Rescuing the Firefighter Through the Floor 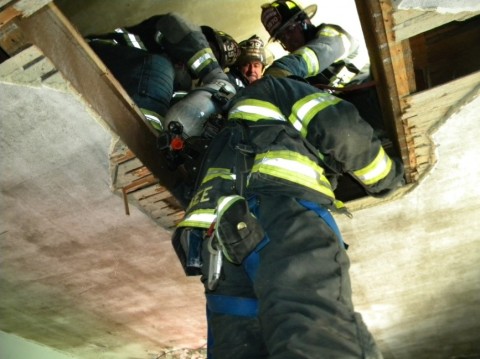 Over the years I have had the opportunity to attend Rapid Intervention Team training throughout the country. I've seen several different maneuvers used to move downed firefighters. Many times crews actually over-thought the process. In most cases, RIT doesn't need to be a complex process for firefighter removal. It is not necessarily a technical rescue, but more likely to be down and dirty work performed by competent and aggressive firefighters.

As long as I can remember the two most common procedures for rescuing a firefighter who has fallen through a floor and into a basement or a below grade void has been the "Nance Drill" (named for Acting Lieutenant John Nance of the Columbus, OH Division of Fire who perished July 25, 1987), utilizing ropes with handcuff knots attached to the victim's arms. The other common maneuver is done by securing the victim to a charged hoseline and raising them from the void. As with everything we do, these both require training and can be manpower intensive.

However, while reviewing the RIT equipment at my local firehouse, the Chief showed me the simple system they were utilizing in the event of this type of emergency. He described it as their "Through the Floor Bag" and said it was simple to deploy under adverse conditions, lightweight, and above all it worked. He went on to explain that they didn't invent it, but borrowed the idea from the Brothers of the Millstone Township Fire Department in Monmouth County, NJ.

The kit consists of 100' of 8mm rope, 2 pompier hook carabiners, and a bag capable of holding it all. Companies using this system pre-rig it by measuring out 25' from each end and attaching the carabiners with a life safety knot of their choosing. (Photo #1) 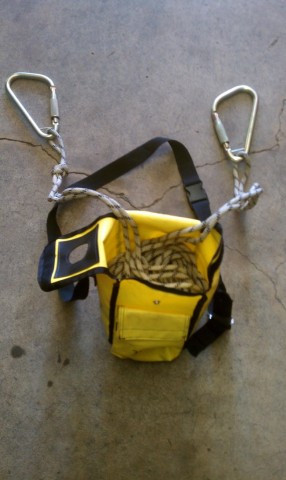 While testing this system, I found it to be very firefighter-friendly and quite practical. The diameter of the rope makes it easy to grip with a gloved hand, but we added an additional knot every 15 feet to assist with the grip as we proceed with the raise. If the downed firefighter is conscious and oriented, he can convert his SCBA harness into rescue mode by transferring the waist strap between his legs to prevent the SCBA from sliding off when lifted. Next the firefighter can simply hook the carabiners to his SCBA shoulder straps and be hoisted from the void by the available RIT personnel.

Should the victim be unconscious or unable to assist in his rescue, a RIT firefighter can be lowered into the void with this system, convert the victim's SCBA waist strap, hook the carabiners to the victim's SCBA harness and assist in the removal (Photo # 2 & 3). The RIT firefighter can then be raised using the same system. One question raised when we began evaluating this set-up was whether or not the SCBA shoulder straps would slide of the downed firefighter. Through all of our testing this did not become an issue. 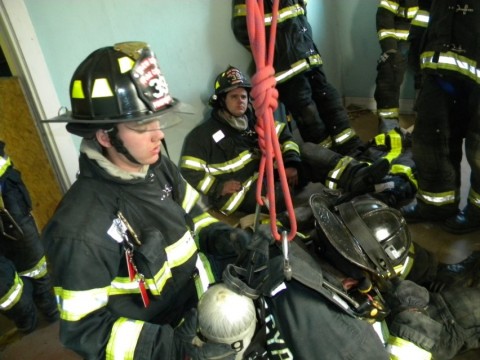 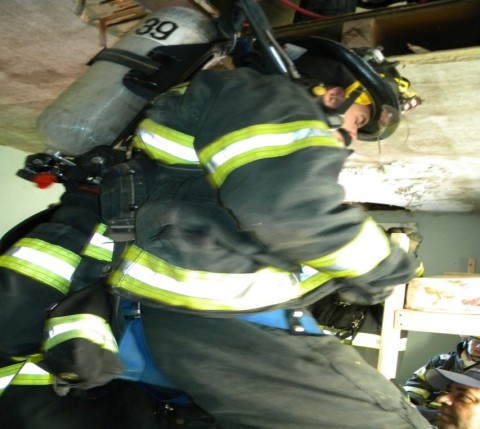 As with any RIT operation, the Through the Floor Bag requires no less than two and more commonly four RIT firefighters for the hauling operation of this rescue (Photo #4).

It is important that RIT firefighters don't get carried away with gimmicks and gadgets being hyped as the next great RIT device. This work requires dedicated firefighters willing to put themselves in harm's way to save a downed Brother or Sister. The "Through the Floor Bag" is a good example of a simple answer to a hazardous task. With training and preparedness, the downed firefighter has a much better chance at survival. 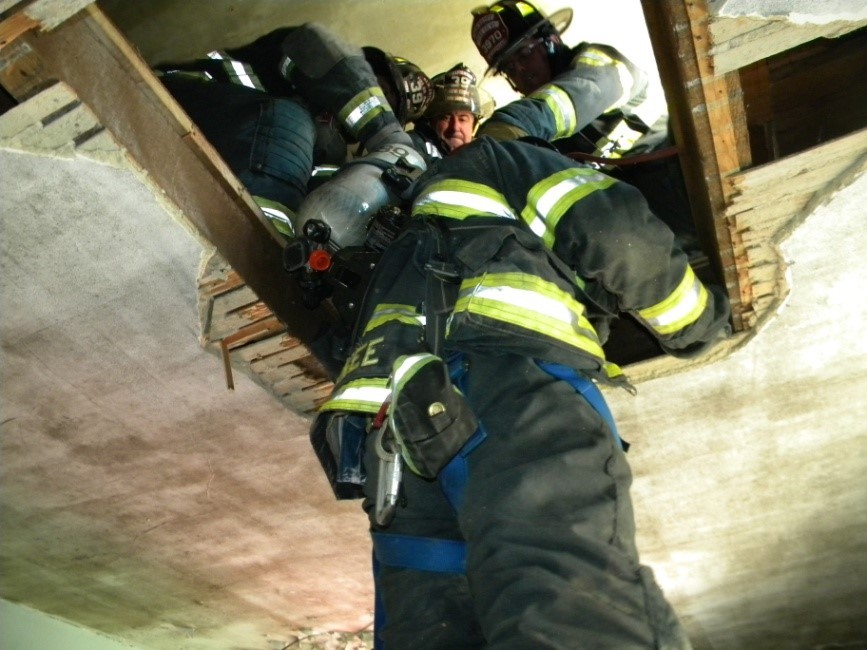 When you subscribe to the blog, we will send you an e-mail when there are new updates on the site so you wouldn't miss them.

It Only Takes One: The Ego Driven Firefighter

Aaron Heller is a 28 year veteran of the fire service and a captain in charge of training for the Hamilton Twp. NJ Fire District #9. Capt. He is a Past Chief of the New Egypt Volunteer Fire Company. Heller is a NJ Level 2 instructor and fire official and EMT. Heller is an instructor with the Mercer County Fire Academy. Capt. Heller instructs at several national, regional, and local training events. Aaron is a founding member of the Jersey F.O.O.L.S chapter of the Fraternal Order Of Leatherhead Society. He is the owner of On Scene Training Associates, LLC.

Join our mailing list to be informed about open enrollment courses, new hands on training courses, and more.